Today I’m continuing with my Christmas novel that releases at the end of September, The Widow’s Christmas Surprise. This is book five of The Widows’ Club series and is Maria’s story.

It released last Tuesday, September 29 in print, e-book, so this will be my last snippet of this until we get closer to December!

I’m starting this snippet well into the book because this is a fun scene. Maria is about to leave her lover, Hugh, to go to Scotland until they can marry. Hugh has taken Maria out for a final outing, to spend some time together before they have to say goodbye. They have now begun to skate.

We are in Hugh’s POV. 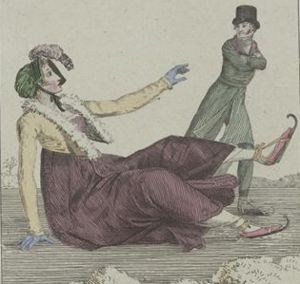 “You know I do not.” Existence here without her would be the worst form of torture.

“Then I won’t go,” she raised her head to look at him, love shining in her eyes, “we can get married, Hugh. I can live with you and your sister and my daughter at Wingate–if only we think about it, we can find a way to be happy.”

“My love, what do you think Lord Kersey will do when he finds out that I have married his kinswoman without so much as a by your leave? I wager I will find myself without a situation, therefore no house, no means to support any of us.” He hated to extinguish the hope in her face, but the harsh reality of their plight could not be mitigated. “Our best plan is the one we agreed to last night.”

“But I don’t want to leave you, not even for the time it takes me to go from here to there.” She struck out toward the far shore.

“Maria, come back.” He set out after her, but she swung around toward him.

“I won’t do it, Hugh. I won’t go. There must be some other way we can be together without another wretched scandal raising its head.” She looked so distraught, so forlorn, where moments before she’d been all smiles and laughter.

“Come back, my love. We can talk about it before we go back to the Hall.” It was more of a perfunctory concession. He’d thought about nothing else for the past days save how to make everything come out right. Nothing, save her leaving or Kit dying, would end their torment.

“Promise me, Hugh. Promise me we will be to—” Maria’s foot slid backward toward the bulrushes, broke through the ice and plunged her into the depths of the icy pond.

The Widow’s Christmas Surprise is available for pre-order on Amazon, B & N, Kobo, and Apple.