Only Marriage Will Do is on Pre-Order on Amazon

On Tuesday, as part of my Release Day celebration for Only Scandal Will Do, I revealed the cover for Book 2 of my House of Pleasure series, Only Marriage Will Do. Yesterday I put it up for pre-order on Amazon at the pre-order price of $1.99. When the book releases on July 31, the price will revert to its regular price of $4.99. 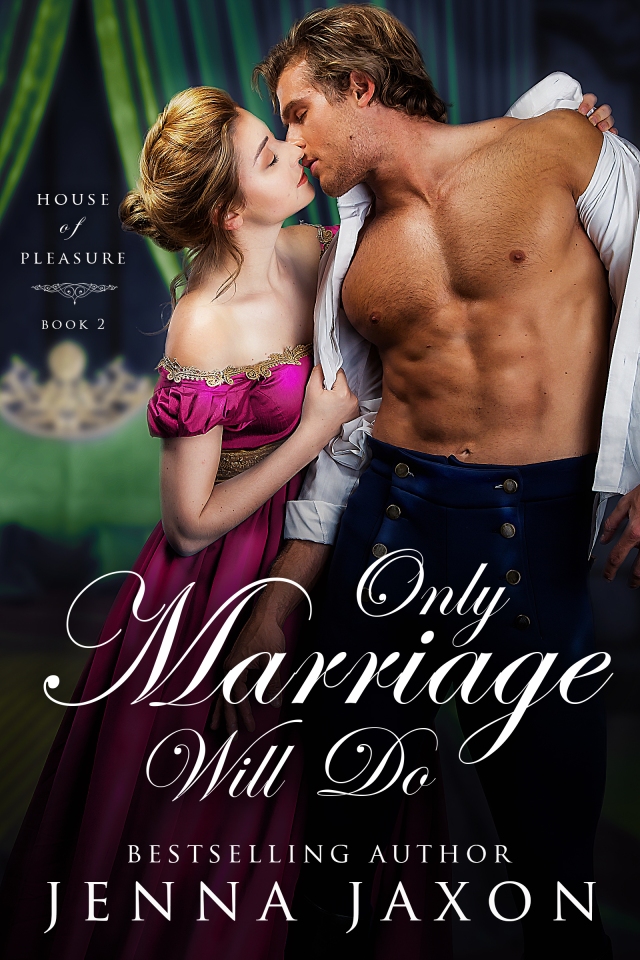 Happy-ever-afters don’t always begin at “I do.”

When two unexpected callers turn Lady Juliet Ferrers’s world upside down, she’s left wondering what on earth to do. The first gentleman claims to be married to her via a proxy marriage, a statement she can scarcely credit—except she was actually betrothed to him once upon a time, an action she now bitterly regrets. Out of other options, Juliet acts boldly when a stranger comes to call, and declares he is her husband, hoping to discourage her dubious bridegroom from pursuing his claim. But when she finally has a moment alone with the handsome visitor, she finds herself hoping she can turn her falsehood about their marriage into truth.

Captain Amiable Dawson seems to have stepped into a fairy land when a beautiful young woman he’s never met introduces him as her husband. The more she explains her situation, the less he is inclined to believe her, yet Amiable is a pushover for a damsel in distress. And if any damsel ever needed his help it’s this one. Against his better judgment—and distracted by Juliet’s charming ways and dazzling beauty—he agrees to accompany her to her family’s estate days away to the north. Along the way the passion between them sizzles until a happy-ever-after is all but assured. But when the question of Juliet’s true husband rears its head once more, Amiable is forced to wonder if he is indeed married to the lady or not.

When his rival abducts Juliet, Amiable is forced to choose between the woman he loves or the law of the land that decrees she is not his wife. Desperate to rescue her at any cost, his last resort may be to kill the man who stands in the way of their happiness.

(I’m actually still tinkering with the blurb, so stay tuned for changes!)

The brass lion-head knocker under Amiable Dawson’s hand sent a sharp rap through the dark walnut door of Dunham House for the second time. The hot July sun hadn’t done his temper any good as he waited on the marble stoop for entrance to the Marquess of Dalbury’s townhouse. He’d been in a foul mood ever since the news of his beloved Katarina’s marriage to the marquess had reached him. Blast it to hell, the girl had accepted his proposal. At least he could make sure she was well and well taken care of by this man she had married.

At last a short, dark-haired maid opened the door. She took one look at him, gasped, and stepped back into the house. Her eyes widened and she glanced to her right, wringing her hands. “Who may I say—”

A man shouted from within. “No, I do not believe you.”

“I do not care what you believe. I told you the truth.” A woman’s voice, raised and sharp with terror, sent a chill through Amiable.

Katarina. What in God’s name?

He barged past the stunned girl and strode down the hall toward the commotion. He burst through the doorway, expecting to defend the woman he loved, only to stop dead at the sight of a man lunging across a sofa and grasping a woman by the wrist. Amiable had half drawn his sword before he realized the woman was not Katarina, but a complete stranger. He dropped it back into its scabbard. None of his affair after all.

The young man, foppishly dressed in a robin’s egg blue satin coat dripping too many layers of frothy lace at throat and wrists, looked at Amiable, a snarl on his lips.

Taking advantage of the distraction, the woman wrenched her arm from the man’s grip. “Praise God. He has arrived at last.” She staggered as she righted herself. “Now you will have to believe me, Philippe.”

The fop scrambled back off the sofa and groped for a black lacquer walking stick that lay on the floor. Lips pressed together, he glowered at the woman. “That remains to be seen, ma chère. In any case, I have shown you the papers. They speak for themselves.”

The woman ran from behind the sofa to Amiable’s side, grazed a kiss over his cheek, and whispered, “For God’s sake, help me. I am alone and he wants to force me to go with him. Please, agree with whatever I say.”

He smiled into her pleading face, then grasped her hands and gave them a gentle squeeze to signal his acquiescence. “Whatever is the matter, my dear?” Hell if he knew. However, he could play his part, even with little information. Let the lady lead and he’d follow as well as he could.

The woman swayed toward him, then took a deep breath. “My dear, may I present Viscount St. Cyr?” She nodded toward the fop. “Philippe, my husband, the Earl of Manning.”

Only Marriage Will Do is available for pre-order on Amazon. Grab your copy for just $1.99 today!