The Writer’s Eye: Using the Senses in Romance Writing ~ The Sense of Sight 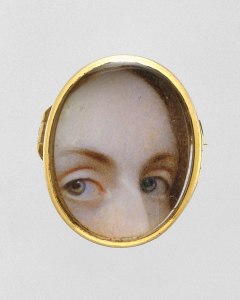 When I first began writing, I blogged a lot about the craft of writing and my thoughts on writing, pretty much as I went along. One series of posts I did almost ten years ago was on using the senses in writing romance. Since I’m once again looking through the writer’s eye at the craft of writing, I thought I’d revisit these posts over the next few weeks, look at them with a more experienced eye and revise as the need arises.

“Before there is a touch, a taste, a moan, a smell, there is perception, seeing and being seen, eye-beckoned.”  This quotation from Anne Taylor Fleming in her article, “Awaken Her Senses:  Look,” in Best Life, persuades us that sight is the primary sense that we use.  Other senses may be touted as being more important, but the sense of sight in a romance novel is paramount to an excellent read.

Romance writers are always told to “put the five senses into your writing.”  What is meant by that is we need, as much as possible, to put our readers into the virtual bodies of our heroes and heroines.  Most romance readers want to vicariously experience the joys and thrills of love by putting themselves into the characters they read about.  In order to do this, the author needs to describe in detail, everything the characters experience—what they hear, touch, taste, and smell, and see.

In this first post on the senses, I’m exploring the sense of sight and how much our readers depend on us to be their eyes within the world of the novel.  When creating a scene, the writer must visualize that place, those people, the action–must see them in her mind before translating that onto the blank page of the manuscript.  In doing so, the writer becomes the guide for the reader, helps them navigate a clear path, shows them exactly what they want the reader to see and thereby creates the vision of the book for the reader.

I once had an editor tell me that I had a great scene, except it took place within a white 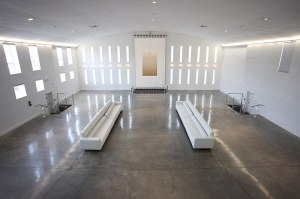 room, devoid of everything. Enthralled by the dialogue and conflict of the scene, I’d neglected to describe anything other than some clothing for the characters. I had to go back and fill in those white walls with descriptions of furniture, artwork, curtains, the sconces on the walls. If I want my readers to “see” the scene, I have to show it to them.

The best way to do this, at least for me, is to submerge yourself in the character, much as the reader will do, and experience the setting, action, and other characters first hand through them.  Like an actor who takes on a role, if the writer takes on the persona of his/her character, he/she can see what they see and pass that imagery along–vividly–to the reader. 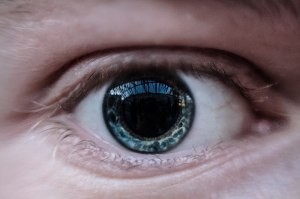 This technique is called “showing,” and is usually tied to the advice “show don’t tell.”  Excellent advice for a writer, but what exactly does it mean?  Beth Hill, a fiction editor, writes in the article “Show and Tell–Not Just A Game We Play,” that “Telling forces a reader to stand outside a candy store window, able to see, perhaps, and hear what happens inside.  But he remains outside.  Yet when a writer shows, he invites the reader into the store to taste the bite of bitter chocolate or the tang of a lemon drop.”  It is not, however, description. 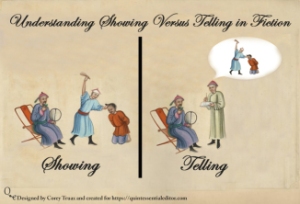 An image to illustrate the difference between showing and telling in fiction writing.

Michelle Sommers, in her article for Romance Writers of Australia titled Simply Writing: Show Don’t Tell Part 1, lists the following ways of making sure you are showing the reader, not telling them: Use dialogue and character interactions to show what they are feeling, use the senses to help the reader delve into the world of the novel, describe things with specifics–a beat up, rusty colored VW bus–and use strong verbs and descriptive nouns, use deep point of view (POV) to immerse your reader in the work, and use metaphors rather than cliches or at least put your own unique spin on the old chestnuts.

A good “show” can involve the reader, suck them into the book, let them become part of the book themselves.  So much so, they will come joyfully back to experience more.

Writers: Do you have problems with showing rather than telling?  How have you overcome this in the past?  Tell me, how do you put your reader into your scenes?

Readers: How big a deal is the show vs. tell advice to you? Do you continue to read authors who tell you about what’s going on rather than showing you? Tell me, how this affects you as a reader?

Thanks for coming by! Join me next week when I explore the use of sound in romance writing.

This entry was posted in On Writing, On Writing Romance and tagged five senses, Jenna Jaxon, sense of sight, show don't tell, show vs tell, writing about the senses, writing romance, writing the senses. Bookmark the permalink.

1 Response to The Writer’s Eye: Using the Senses in Romance Writing ~ The Sense of Sight