To begin May off fresh, I shifted to the first of my Widows’ Club books, To Woo A Wicked Widow, because all the e-books of the Widows’ Club series are on sale this month! 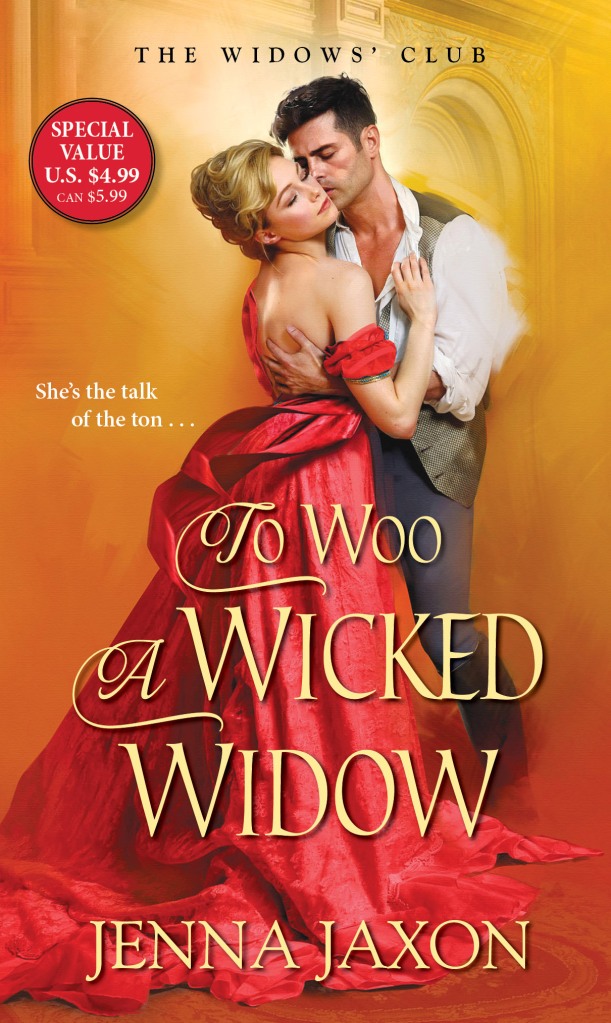 Lady Charlotte Cavendish is still the spirited girl who tried to elope in the name of love. That dream was thwarted by her father who trapped her into a loveless, passionless marriage. But now widowed, Charlotte is free to reenter the giddy world of the ton—and pursue her desires. For hardly your typical widow, she remains innocent to the pleasures of the flesh. Yet her life is finally her own, and she intends to keep it that way . . .

Nash, the twelfth Earl of Wrotham, is beguiled by Charlotte at first sight—and the feeling is mutual. When he receives her intriguing invitation to a house party, the marriage-minded lord plans to further their acquaintance. But even he cannot sway her aversion to matrimony, and only with great restraint does he resist her most tempting offer. For unbeknownst to Charlotte, the misadventures of the past are revisiting them both, and bedding her could cost him everything—or give him everything he ever wanted . . .

I began my snippets last week well into the book. Nash, the Earl of Wrotham, is in the midst of trying to stop a gang of robbers who are terrorizing the countryside. Lady Charlotte, with whom he is falling in love, has suddenly come to visit him at his house–a scandalous thing for a lady–even a widow–to do. Charlotte has also asked Nash to call her by her first name, which is another somewhat inappropriate thing suggesting she wants a more intimate relationship with him. They continue their flirting until Nash mentions an incident with a tenant and the conversation turns serious. In today’s snippet, which picks up immediately after last week’s snip, the conversation takes another very different, very serious turn. We are still in Nash’s POV.

“That is appalling–I had no idea they had gotten so out of hand.” She looked indignant rather than frightened, which concerned him not a little.

“In fact, when you leave, I’ll send one of my grooms with you–only one person to protect you is not enough any longer,” Nash said and patted her hand, “I want to keep you safe, Charlotte.”

Her gaze suddenly plummeted to her lap, where her hands now twisted in her skirt. What did that mean?

She sighed and her hands stilled. “I suppose you’ll find out anyway.”

“Find out…were you attacked on the way over?”

And now to “finish” the scene and the book for now (I’m moving to another book in June):

“Alone?” His blood froze. “Don’t you know how dangerous that is?”

“No, I didn’t. The grooms mentioned a gang of robbers, but I didn’t think they would attack in the daytime.” Her voice rose, petulant.

“Obviously they will attack whenever they please.” He couldn’t believe she had been so stupid. “You were lucky you were not robbed or worse.”

“Well, I wasn’t, so there is no harm done.” Charlotte pulled her hand from his grip and stood. The light had gone out of her eyes.

Nash rose as well, scowling. “There might very well have been. I know you have been told you should always ride with a man present. Every girl is given that instruction from the schoolroom.”

She rounded on him, her formerly gray eyes now a furious green. “I am not a girl, I’m a woman. A woman free to make her own decisions. If I want to ride to London without an escort, I can do it. No one can tell me what to do and not do.”

“Well, perhaps someone should!”

To Woo A Wicked Widow

is available for the last time at .99 today on Amazon.

In fact, the whole Widows’ Club series of e-books is on sale only through TODAY! Check them all out here on Amazon.