Much Ado About A Widow Signing Tour

If you missed all my Facebook posts (and Twitter and Instagram), I did a marathon tour of Barnes & Noble bookstores in the Washington, DC-Maryland area this past weekend, signing copies of my just released historical romance, Much Ado About A Widow. 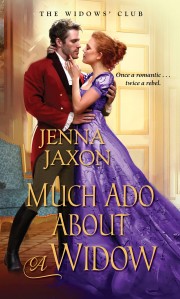 I’d seen an article on the internet saying there were 18 B & N stores within a 50 mile radius of Alexandria, VA and it got me to thinking that a signing tour (where I go into a book store and ask to sign any copies they had of my book) would be a good idea to help the launch of the new book. My friend Ella Quinn told me “A signed book is a sold book” which has become my mantra these days. 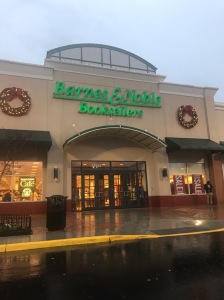 So early Saturday morning my daughter and I left on a

2-day whirlwind tour of Northern Virginia and Maryland, starting with the Fredricksburg B & N and ending at the Bowie bookstore. In-between I visited a total of 15 stores (2 of the 18 I discovered didn’t have my book and 1 was too far north to reach with our schedule), only 2 of which didn’t have copies of the book (one of those, I think had had a copy but had already sold it). 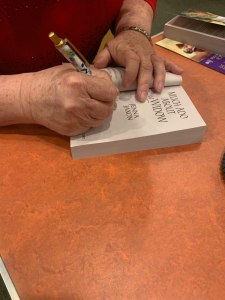 Signing books at a Barnes and Noble bookstore

In the end, I signed 37 copies of books from The Widows’ Club series! Most bookstores had a copy of last December’s release What A Widow Wants, which of course I signed as well. And the last bookstore in Bowie had the first three of the series, but not the 4th book.

actually rather thrilled to have an author want to come in and sign their books. In fact, in the store at Seven Corners, the clerks were terribly excited to see me and helped me very quickly find and sign the two copies of my books they had. I guess most authors either don’t have the time or the means to do this kind of promo that’s all on their own dime. And I’m not at all certain how much I will gain financially from the experience.

But–if this kind of promotion will generate interest in my books and even more importantly in me as an author (who the clerks may then remember and recommend my books to customers), then I think it will be well worth it.

This coming Sunday I’m doing a mini-tour of the Barnes & Noble stores in the Richmond, VA area and one fan has already contacted me about meeting her at the store so I can personalize the books’ autographs. I can’t wait to meet her!

couple of months and when I go on Spring Break the first week in March, I’ll be heading down to sunny Florida along with all the rest of the college kids–not for the beaches but for the bookstores!

For the past 10 years, ever since my first book was published, my cousin has said to sign her up to go with me on my book tour.

Well, VaRee, get ready for that road trip!