Welcome back to my 10th Anniversary-As-An-Author Party!

I’m celebrating today with a cover reveal for Time Enough to Love, my first novel. 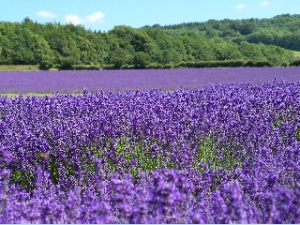 Something anyone will tell you is that the scent of lavender is very important to my medieval story. Alyse’s clothes are scented with lavender flowers her mother cut and dried near their home in France. Not only was this a way for her to smell good–and Geoffrey comes to associate her very strongly with the scent of lavender–but lavender acts as an insect repellent. And in a world where fleas were carrying the bubonic plague, this was quite a plus healthwise.

And lavender is such a beautiful, sweet smell that for my swag for Time Enough to Love, I have always made lavender sachets to give out at conferences. 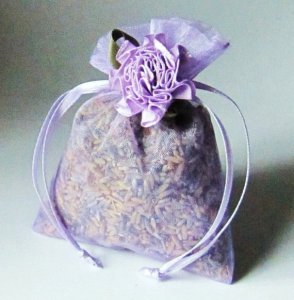 This hour, my giveaways are a swag pack that will include a lavender sachet plus some other goodies and a $5.00 gift card to Starbucks. Just comment on the post about the scent you think is most romantic.

And here’s another excerpt from Time Enough to Love. In this one, Geoffrey has gone back to his home because his brother is ill. Alyse is waiting for word from him.

EXCERPT from Time Enough to Love:

“Thomas.” Alyse curtsied quickly then blurted out the fear she had fought almost since Geoffrey had left. “Is my lord well? Have you news for me?” Thanks to Anne and Margaret’s thoughtless comments, she had become convinced Geoffrey had fallen ill with Sir Robert’s ailment and now himself hovered between life and death.

Avoiding her eyes, he answered briefly. “Aye, my lady. When I left him, Geoffrey was well enough.”

While his words relieved her, a shadow still lay on her heart. If Geoffrey was not ill, why had Thomas’s manner changed? What had summoned this aloof stranger? He was withholding something from her.

He hesitated, searching her eyes then looking away. He fisted his hands. “Sir Roland is…has…”

Alyse could stand it no longer. She crossed to stand directly before him, laid a cold hand upon his arm, and gripped it. “Tell me.”

That there was something he could not bring himself to tell her filled her with terror. He said Geoffrey was well enough when he left. What about now?

Before she could question him further, he drew out a folded piece of parchment, sealed

with blue wax and stamped with a signet ring bearing Geoffrey’s family crest. She stared at it, a cold dread creeping through her.

“Geoffrey bade me place this in your hand and no other, my lady.” Thomas thrust the missive toward her.

Alyse compelled herself to hold her hand out.

He sighed. “He also bade me be at your service, lady, had you need of anything.” He gave the parchment into her hand. As he did so, she looked into his eyes and recognized the same pity she had seen in Princess Joanna’s.

Panic made her arms weak and her fingers numb. She forced her shaking hands to break the seal. Alyse unfolded the letter and slowly read the scratched and blurry words.

In her bedchamber, Princess Joanna waited with Maurya, Anne, and Margaret. The women’s faces had changed from puzzlement to fear. Joanna looked from one maid to another, trying to hide her despondency. So many prayers had not been answered today.

Anne finally summoned the courage to ask, “Your Highness, what has happened?” She choked back tears. “I meant no harm, earlier. Indeed,” she crossed herself, “I wish Sir Roland and Sir Geoffrey long life.” She turned stricken eyes toward Joanna and whispered, “Is Sir Geoffrey—”

A wrenching wail of anguish shattered the hushed room, as though the very walls echoed the sound. The four women stood rooted to the floor at the almost-inhuman shriek of grief.

The sound cut off abruptly, and in the eerie silence that followed, they heard the soft thud of a body hitting the floor.

Time Enough to Love is available on sale at the following e-retailers for $2.99 until January 31:

Remember: if you click here there is a Rafflecopter giveaway of a $25.00 Amazon gift card. All you need do is enter (there are several ways to get chances) to have a chance to win. Drawing will be held on January 31st.

Also, come back today at 4:00pm for a chance at different prizes and to find out how music played an important part in Time Enough to Love.