Heart of A Scoundrel Releasing Tuesday!

At long last, the next installment of the Handful of Hearts series is ready to release! 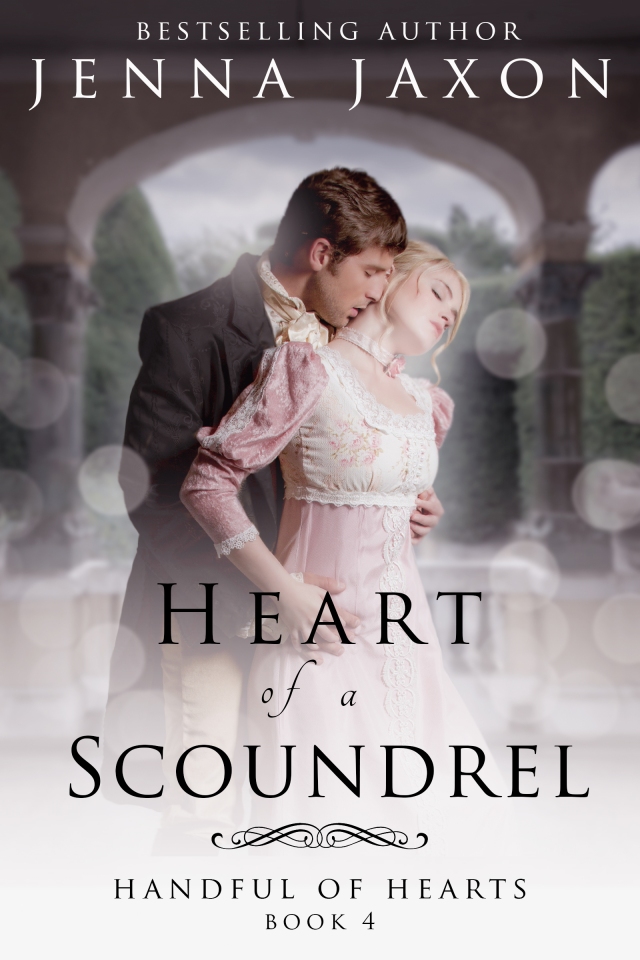 Heart of a Scoundrel will release on Tuesday, October 9 on Amazon and Smashwords, and a few days later on Barnes & Noble, Apple, and Kobo!

Recent heiress, Miss Amanda Sharp, is out in Society for the first time and enjoying the social whirl, especially when she dances her first dance with the handsome Lord Somersby. She’s aware of his bad reputation with ladies, but she’s confident she can lead him down the aisle to the altar without raising a scandal. Headstrong, and determined to reform Lord Somersby, Amanda finds herself in danger of losing more than a hand of cards to the scandalous lord.

After several months of licking the wounds he received at a disastrous Christmas party, Richard, Lord Somersby, has another wager to win. He must woo and jilt three young ladies in a month’s time in order to win his racing stable before donning the leg shackle of marriage with a duke’s daughter. His third victim is Miss Amanda Sharpe, a refreshingly determined young woman who makes her interest in him well known. It should be child’s play for the villainous Richard to woo her, make her think he’s in love with her, then spurn her. A plan that might work if he can keep his mind on winning rather than on the lady’s entrancing form and fiery spirit.

“I would not want to keep you, my lord, but I wondered if you might… take me out for a breath of air? The room seems particularly warm after the dance.”

His eyes widened and an eager grin spread across his face. “A delightful idea, Miss Sharpe. You are correct, of course. The dancing has indeed heated the room indecently.” He steered them toward a set of French windows that led out to a small porch overlooking the back garden.

Cool air brushed Amanda’s hot cheeks and she drew in delicious breaths. “This is quite lovely, Lord Somersby.”

“Oh, thank you.” So much for cooling off. Her cheeks caught fire, and she plied her fan a bit too vigorously, but it did help assuage the burn. What topic of polite conversation might she employ to keep him here a few more minutes? Weather? Horses? He’d mentioned he was going to the card room. “I promise not to keep you from your game long. You enjoy the play, Lord Somersby?”

Smiling at the mere thought of sitting down to a game of cards, Amanda ceased to fan herself and looked eagerly into his face. “I do as well, my lord. I play whenever I have the chance in Wellesbourne, infrequent though it is. I find developing a strategy for each hand particularly stimulating. I would play every day if I could.”

“It is a skill few young ladies take seriously, it seems. At least with those who have partnered me in the past.” He peered into her face. “You, however, would be different in that respect, I believe.”

“I assure you I would, my lord. My mother taught me the different card games, but my father instilled in me a desire to be the best.” How anyone would not work to sharpen their skills so they could win at cards had always confounded her. “Why play at all if not to win?”

“My sentiments exactly, Miss Sharpe.” His smile warmed, making her heart race. “I always play to win.” He took her hands, his heat seeping through her gloves. “I hope at some point during the Season, we will be able to play together.”

“It is a shame ladies are not allowed to engage in card games. At least not at such an entertainment as this. As I dearly love to play, Mrs. Doyle has arranged…” The most wonderful idea struck Amanda so suddenly she couldn’t speak. Of course, what a splendid opportunity! Gazing into Lord Somersby’s face, she struggled to form words once more. “If… If you would be so kind as to take me to Mrs. Doyle, I would be very grateful, my lord.”

“Your every wish, Miss Sharpe.” He led her back into the ballroom then steered them around various groups of guests, maneuvering them quickly to her chaperone.

“Mrs. Doyle, may I present Lord Somersby? Lady Hamilton introduced us earlier. My lord, Mrs. Doyle is my sponsor. I am residing with her during the Season.”

The lady curtseyed, the towering green egret feathers in her turban bobbing. Her sharp gaze took him in and her mouth pursed. “Good evening, my lord.”

“Mrs. Doyle, I am delighted.” Lord Somersby bowed crisply, a pleasant smile on his face.

“Mrs. Doyle, would it be possible to invite Lord Somersby to our evening of cards on Monday? He would be a splendid addition to our guest list, do you not think?” Amanda widened her eyes, hoping she looked sufficiently innocent. It was terribly gauche to ask such a thing while the gentleman stood right in front of her chaperone, for how then could she say no? Which, of course, was exactly why she’d done it.

“I believe we can find room for one more name on the guest list.” Mrs. Doyle’s voice sounded affable, but she cut her eyes at Amanda.

Oh, yes, there would be the devil to pay for this little social transgression. Not that she particularly cared.

Please join me here on Tuesday, October 9 at the release party for  Heart of a Scoundrel!

I’ll be giving away copies of the other books in the Handful of Hearts series, so you can perhaps binge read the series before you read Scoundrel. 🙂  See you then!

Books in the Handful of Hearts series:

This entry was posted in Uncategorized and tagged feisty heroine, Handful of Hearts series, Heart of a Scoundrel, historical romance, Jenna Jaxon, Regency romance, villain to hero. Bookmark the permalink.