Guest Post: Liza O’Connor on Guardian Angels in Luck Be An Angel

I’m a firm believer of Guardian Angels. My first Guardian Angel was my Great Grandmother Caroline. She saved me from the continuous efforts of my brother to become an only child. There were also a great many water-moccasin dangers that required her assistance. (I was fascinated with poisonous snakes.) When I got older she would save me from car accidents, plus the three times my ex-husband tried to kill me. Over the years, I acquired two more Guardian Angels, my grandmother Bobo, (she preferred the name of a clown over ‘grand ma’ said with an Arkansas twang) and finally my dad became my third guardian when he died. Thus, now I’m pretty well bullet-proof, but those early years, between me being curious and fearless, and my brother determined to be an only child, Great Grandmother Caroline had a hard time keeping me alive.

You may ponder…Is Liza being serious?

Yes, I am. So when I put in a guardian angel into my stories, which I often do, I treat them and ghosts as real entities. (I also have a ghost in my house-so I have to acknowledge her as well.) I know, some of you will think I’m nuts (reasonable conclusion if you have never been saved by a guardian angel, or had a ghost live in your house.) However, my reality and experiences say both Guardian angels and ghosts do exist, so they are fair games for my books. Thus, Luck be an Angel has a Guardian Angel that watches over Sara and massive quantity of boys. However, no ghosts show up. 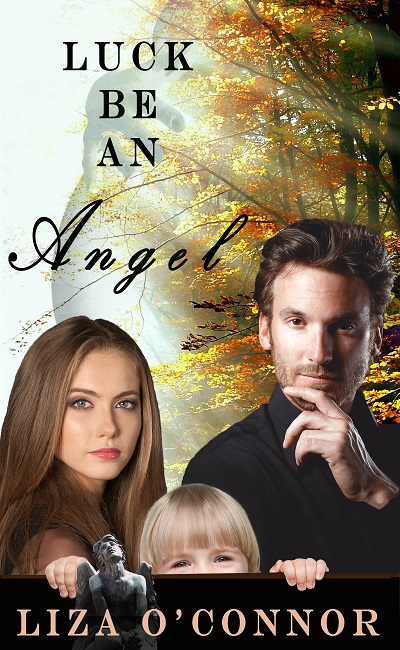 Reporter, Ethan Long, is sent into the backwoods of Arkansas to investigate a woman who claims her sixteen boys were born by Immaculate Conception. Not believing in divine intervention, Ethan plans to uncover the identity of the man who continues to impregnate Sara Smith every year, leaving her to raise her sons on nothing but luck and love. He enters their home as a tutor and eventually discovers the truth, but not before he has fallen in love with Sara and her wonderful boys. Now he must face his own crossroad in life and decide whether to follow his heart or his professional obligations.

Sara bit her lip and forced herself to make eye contact with Ethan. “You should know I’ve got a bad reputation. People say I’m a loose woman, but that’s not true. However, if you stay here, they’re going to think you and I are…well, that we aren’t behaving properly. No more harm can be done to my reputation, but yours will take a beating.”

He shrugged his shoulders. “I care more about those boys staying together than I do about what the townspeople think of me. So should you.”

“Our Ma loves us!” Mike yelled as he shoved Mr. Long on the shoulder. “Don’t you ever talk bad about our Ma!”

“I didn’t mean it that way,” Mr. Long assured her son. “I’m just mad at the townspeople for making her life so hard.”

Her son breathed in hard, fighting off his tears. “Well, all right then,” he said and ran from the room.

Mr. Long looked up at her. “I meant that. Don’t worry about what the townspeople think. Just worry about your boys.”

She laughed and rubbed her stomach. “That’s a lot of worrying.”

“Are you…?” He stared at her swollen stomach, unable to finish the question.

“Having another boy? I reckon,” she said. “I haven’t decided what to name him. Right now all my boys got a brother with the same first letter, which makes them letter-mates. The boys like the pairs, but in a few years Joshua will want to go off and be a man and then what will poor Joe do without a letter-mate? So I was thinking maybe I should start again on the same letters, instead of making new ones.” She paused and studied him. “What do you think?”

Mr. Long gave her question serious consideration before answering. “Add a name to the current letters. It will give the younger letters a chance to be a leader during each of their lives.”

She smiled and nodded in agreement. She had noticed how much Joe liked being the elder today. She shared the story with Mr. Long.

“I’ll shift them about when we do group studies. That way they’ll all get a chance to lead.”

She was glad Mr. Long had come. He might not be what she wanted, but she suspected he was precisely what she needed. That happened a lot in her life. Some said she was just lucky, but she knew luck had nothing to do with it. She had a guardian angel who made sure they got whatever they needed.

Luck be an Angel

Liza O’Connor lives in Denville, NJ with her dog Jess. They hike in fabulous woods every day, rain or shine, sleet or snow. Having an adventurous nature, she learned to fly small Cessnas in NJ, hang-glide in New Zealand, kayak in Pennsylvania, ski in New York, scuba dive with great white sharks in Australia, dig up dinosaur bones in Montana, sky dive in Indiana, and raft a class four river in Tasmania. She’s an avid gardener, amateur photographer, and dabbler in watercolors and graphic arts. Yet through her entire life, her first love has and always will be writing novels.

A Long Road to Love Series

Climbing Out of Hell

A Fortune to Die For

Standalone books with a special twist

Even the strong can use a helping hand when life gets hard.

Luck be an Angel

OTHER BOOKS BY LIZA

12 Responses to Guest Post: Liza O’Connor on Guardian Angels in Luck Be An Angel