“A Pirate’s Life for Me” by Gina Danna

Pirates. With Hollywood giving us pirates like Captain Jack Sparrow, what’s not to like? He’s adorable with a wit. But with the return of Starz’s Black Sails, pirates take a turn for the dark side of violence and blood, all for coin, which is spent immediately on drink and whores till they are broke and they start on the hunt for more treasure again.

Yet why would English sailors turn pirates and attack their own country? The English used privateers during the war against France and Spain in the 17th century by giving these men a letter of marque, allowing them to hunt Britain’s enemy without retribution and required the privateers to pay the crown a percentage on riches taken. Unfortunately, at the end, they saw that privateer had turned pirate, attacking more than enemy ships. With this monster on their hands, they shoved these men away, calling them criminals, leaving them adrift. Men like Flint, Long John Silver and the rest of the pirate stories of war against the English show the dark side, the true reality of the world of pirates. It is a violent world.

Set free of England as unfit for English society, pirates flourished during the 17th to 19th centuries. The English Royal Navy was a harsh place to work. Officers were appointed, mostly out of the nobility. Their crew was held in line with harsh, often extremely cruel laws and punishments, so recruiting was hard, so hard they had to ‘press’ men into service. It was not smooth sailing, so when pirates attacked and offered the sailors the ‘opportunity’ to ‘get on the account’, the phrase to take up piracy, many jumped at it.

The world of piracy was one of the original democracies of history. Anyone, regardless of

Circa 1715, Captain Edward Teach (1680 – 1718), better known as Blackbeard, a pirate who plundered the coasts of the West Indies, North Carolina and Virginia. His hair is woven with flaming fuses to increase his fearsome appearance. (Photo by Hulton Archive/Getty Images)

his or her origins or sex, could become a pirate. Pirates did not believe in racist views. Many times, they raided slave ships off the coast of Africa because 1. Those ships had a small crew with members who would join them, 2. The slaver ships were large with a large hold that pirates could readily use and 3. They’d free the slaves (most did verses selling them) and some of those Africans, too far from shore, would also join the account.

How did one become a captain as a pirate? Those who did earned the trust of the crew. A captain could be easily replaced if he didn’t bring them large treasures to take or he lost their trust. On a ship, all slept together with only the captain taking a singular cabin. All could be brought to account easily by the crew.

The fear of women onboard ships is a fear that has held across all shipping lines, navy to pirate, and prevalent through centuries. Even during World War II, the Waves, who were the women naval reserves, were not on the ships because that fear was strong. Since all navy personnel are assigned to ships, these women were assigned to ships that had been sunk in the Potomac River during the American Civil War. So Eleanor’s presence on the ship sent the pirates on edge. Considering women could become pirates, even leaders, like Ann Bonny, the irony of fearing women onboard is an oddity.

Piracy had its supposed glory days during the 17th to early 18th centuries but it still exists. To get a glimpse of their world, join Eleanor, James and Trent in This Love of Mine. 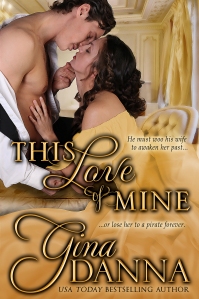 England 1810
Kidnapped on a trip to London, Lady Eleanor Whitmore awakes in the hold of a ship with no memory of her past or of her perfect marriage to Lord James Haddington III, Earl of Windhaven. All she knows is that a fierce and stunningly handsome pirate is yelling about women being bad luck on a voyage. Adrift at sea in both body and mind, she finds herself falling in love with the pirate captain, whose flashing eyes and muscular frame leave her breathless.
Lord James resisted the shackles by marriage until he met Eleanor. Her beauty and charms captured his heart, and now that she’s disappeared, he vows he will find her or die trying. His search becomes a chase to the New World, a trip that could destroy him as Eleanor’s bonds with a pirate captain tighten. Can James provoke her memory and win her love, or will the pirate steal her heart forever…

This Love of Mine is available at the following e-tailers:

A USAToday Bestselling author, Gina Danna was born in St. Louis, Missouri, and has spent the better part of her life reading. History has always been her love and she spent numerous hours devouring historical romance stories, always dreaming of writing one of her own. After years of writing historical academic papers to achieve her undergraduate and graduate degrees in History, and then for museum programs and exhibits, she found the time to write her own historical romantic fiction novels.Now, under the Texas sun and with the supervision of her three dogs, she writes amid a library of research books, with her only true break away is to spend time with her other life long dream – her Arabian horse – with him, her muse can play.