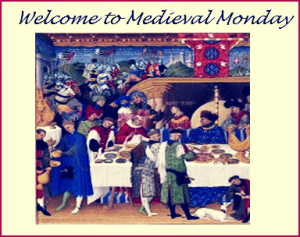 Join us as we celebrate weddings, holidays, and all manner of medieval events!

This week’s excerpt is from

Thundering beats on the door roused them from their bed as men from the villagers came to claim ale from Hal as Lord Danby’s representative. He allowed himself to be taken away, leaving Joanna in the hands of Meg and the other women to gather flowers and greenery from the moors and bind them into wreaths.

The women arrived on the village green at midday. Raucous, uncontrolled games were taking place amid cheers and catcalls of the onlookers already well into the ale, but stopped as they appeared.

The call was taken up and repeated by everyone present. Girls giggled and blushed, young men freely ogled them and Joanna felt hands in her back pushing her to the front of the crowd.

Hal appeared from among the men. He took her by the hand and turned her to face everyone. A crown of twisted greenery was placed on her head to cheers and good-natured whistles from everyone watching. Pipers began to play and dancers found their partners.

‘I thought the May Queen was supposed to be a maiden,’ Joanna whispered to Hal.

He held her waist tightly as he led her to the circle. ‘This year I thought I’d exercise my rights to choose.’

‘I can do what I like, I’m their lord’s son,’ he joked. He put one hand on her back, the other to her cheek and looked into her eyes. ‘I cannot give you tournaments and pageants to delight you, but I wanted to give you something to remember.’

She covered her hand with his. ‘You have,’ she said. ‘This is enough.’

She realised as she said it that she spoke the truth.

The dancing and games carried on long into the night. As the sun set Hal and the men carried brands from the forge and lit the bonfire. More barrels of ale were tapped and the ox that had been roasting all afternoon was speedily eaten.

As groups and couples began to disperse to find their own diversions Joanna sat alone by the fire, warming her hands and yawning. She’d danced until her calves burned and drunk far too much wine. Her bed called her. Hal had vanished a while before, called away by the miller, and she was becoming tired of waiting. She walked home and was halfway to the door when she noticed light coming from the forge.

Curious, she walked across the dewy grass. The door was partly open, but no sound came from within. Cautiously Joanna pushed the door wider and peeped around it.

Hal was standing by his workbench. In the dull glow of the furnace Joanna could only see his back.

‘What are you doing?’ she asked.

Hal jumped at her voice. He strode towards her, blocking her entry into the forge.

‘Nothing’s wrong. I’m coming now,’ Hal said. His voice was guarded. He took hold of her arm and tried to turn her away.

He was so obviously hiding something. Determined to find out what, Joanna twisted from his grip and pushed past him. Her blood drained slowly away, leaving her cold to the bone as she recognised her own drawing pinned to the beam above the furnace.

‘You dropped it on the moors,’ Hal said.

She remembered the day, but that had been over a week ago and he had kept it all this time! Furious, she lunged and ripped the drawing from the wall. She rounded on Hal.

‘How dare you keep it,’ she stormed. ‘You had no right to do that.’

She pushed roughly past him and wrenched the door open, stumbling out into the darkness.

Rejected by her favored knight, Joanna Sollers knows she will never love again. Especially when the man she’s now forced to marry is none other than her beloved’s half brother!

For blacksmith Hal Danby, marrying Joanna makes his lifelong dream of entering the Smiths’ Guild possible, even if the secrets in his past mean he’ll forever keep his distance. But everything changes with one stolen night, and in the arms of his new bride, Hal wonders if this loveless arrangement could transform into something real…