Weekend Writing Warriors ~ 11/6/16 Seduction at the Christmas Court: A Summons from the King

This month I’ll be posting snippets from my new medieval Christmas story, Seduction at the Christmas Court. This book continues the story begun in Time Enough to Love and its hero Lord Geoffrey Longford and heroine Lady Alyse de Courcy, now Lady Longford. The cover is temporary–I’m hoping to have a cover reveal in a couple of weeks! 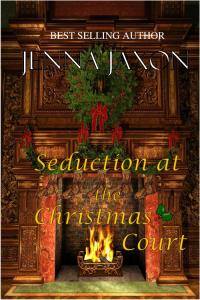 This story begins in December 1349, about seven months after the end of  Time Enough to Love ended. As Alyse is decorating Longford Manor for Christmas, a messenger arrives with a message for them.

“Has the king demanded your service to him once more?” Her heart beat furiously as she prayed to God there was no war.

Her husband’s mouth pursed in displeasure and he waved the servant to stand. “Aye, he bids me give my service and you as well, my lady.”

“My service?” she asked, her own brows knit in concern as she plucked the cream colored paper from his fingers and perused it. “What service would His Majesty command from me–to bid me be your squire?”

A deep laugh rolled up from Geoffrey’s broad chest as he shook his head. “I’d trust you to attend me and my troops anywhere, my love, however, you would scarce be able to lift my sword much less my armor.”

Pursing her lips, she returned her attention to the parchment, but Geoffrey spoke before she could begin to read. “We are called to attend King Edward and Queen Philippa at the Christmas court at Havering.”

Lord and Lady Longford journey to the Christmas Court of King Edward III in the year 1349 to wait upon the king and take part in some Yuletide merriment. However, when Geoffrey is suddenly called into the king’s service again, Alyse must remain at the court, attending the queen and persuading her rebellious sister to accept an unwanted betrothal. When rumors of Geoffrey’s death arise,  Alyse fends off an old suitor who wants to renew an old friendship. But how long will he take “No” for an answer?

Other Books in the Time Enough to Love series:

31 Responses to Weekend Writing Warriors ~ 11/6/16 Seduction at the Christmas Court: A Summons from the King