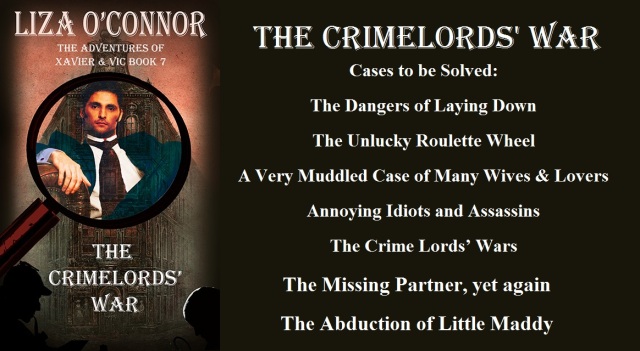 When Vic and Claire were young children, they came to live with their Aunt Madeline after a ship wreck took both parents. Having watched her mother drown due to the heavy skirts she wore, Vic refused to wear skirts. Aunt Maddy explained people would be most cruel if she attempted to wear pants.

“Not if they think I’m a boy. Frankly, boys lead a more interesting life anyway. Plus, when I reach eighteen, I can be guardian of Claire, keeping her safe from the uncle you don’t trust.” Madeline agreed with all points, and turned Vic over to her butler with instructions to teach Vic how to become a proper gentleman.

Over the years, Vic resented how Gregory harped and scolded her all the time, while Claire got to do whatever she wanted. When she met Xavier he agreed that Gregory was too hard on her and too lax with Claire. Naturally, Vic confronted her butler as to why he preferred Claire.

Gregory was gob smacked. He explained Claire got to do what she wanted because she was the mistress of the house. However, he saw and treated Vic as his son, and his scolds were solely to make Vic an outstanding gentleman.

Vic was so delighted with this new perspective, that she now refers to Gregory as his butler-parent. She still gets scolded, but knowing it comes from a place of love makes all the difference in the world. 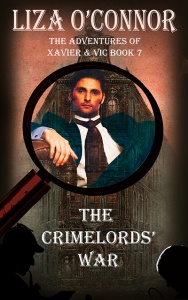 Chaos abounds in Late Victorian England. Xavier goes off on a mission without Vic because her protector, Tubs, is not well enough to keep Vic from harm right now. In fact, Tubs is dying and the doctor doesn’t expect him to live for more than a week. Upon discovering Tubs’ dire situation, Vic sets about rescuing him instead.

Good thing too. To all appearances the two strongest crime lords of London have declared war on each other. Only the two attempts on Vic’s life tells her this is all a clever plot by a third party—worse yet, a female villainess.

To stop the crime lords from destroying one another, leaving their territories open to the Russian spy, she must bring Seth and Samson together, share what is really going on, and get them to agree to work against this third party. Not an easy task since Seth Sojourn thinks Vic is nothing but a foolish sop. Unfortunately, Xavier has gone missing, so it’s up to her to convince the angry crime lord that her plan is best. Otherwise, this villainess will kill everyone who gets in her way and bring England to its knees.

When Gregory brought them dinner, she was about to scold her butler-parent for the meager bowl of soup he brought Tubs, only his words silenced her. “I had the cook put shredded beef in your soup tonight. It should help rebuild your muscles.”

He then smiled at Vic. “Might I speak to you for a moment?”

She left her food reluctantly and followed him into the hall. Gregory shocked her by breaking his own rule that gentlemen never hug. He pulled her into his arms and briskly hugged her, then released her. “When do you plan to have Tubs stand again?”

“When he seems rested enough.”

“Were you expecting that to be today?”

“The problem is, Casey and Fagan may not be up to the task for another week. They appear to have pulled muscles in their assistance today.”

She sighed heavily. “Send them my apology.” How would Tubs ever heal without safely standing?

She smiled as an answer came to her. “Will you call David at his dentistry shop and ask him to stop by on his way home. I have a challenge for him.”

Gregory frowned. “You cannot expect David to be able to lift Tubs.”

Vic laughed at the idea. Her brother-in-law weighed no more than she did. “Of course not. I expect him to devise some method for Tubs to walk on his own.”

That earned her a second hug. She smiled at her grand achievement.

“Now back to your mission,” Gregory scolded and left her.

Need to catch up?

A Right to Love

All Xavier & Vic books are Free with Amazon Unlimited

Liza O’Connor was raised badly by feral cats, left the South/Midwest and wandered off to find nicer people on the east coast. There she worked for the meanest man on Wall Street, while her psychotic husband tried to kill her three times. (So much for finding nicer people.) Then one day she declared enough, got a better job, divorced her husband, and fell in love with her new life where people behaved nicely. But all those bad behaviors has given her lots of fodder for her humorous books. Please buy these books, because otherwise, she’ll become grumpy and write troubled novels instead. They will likely traumatize you.

You have been warned.

Ghost Lover—Two British brothers fall in love with the same young woman. Ancestral ghost is called in to fix the situation. And there’s a ghost cat that roams about the book as well. (Humorous Contemporary Romance)

Saving Casey— Cass wakes up in the body of a troubled teen who has burned every bridge imaginable. Her only choice is to turn this life around, but that’s much harder than she ever imagined.

Worst Week Ever — Laugh out loud week of disasters of Epic proportions.

Oh Stupid Heart — The heart wants what it wants, even if it’s impossible.

Coming to Reason — There is a breaking point when even a saint comes to reason.

Climbing out of Hell — The reconstruction of a terrible man into a great one.

The Hardest Love — Is to love oneself. Sam’s story.

The Troublesome Apprentice — The greatest sleuth in Victorian England hires a young man who turns out to be a young woman.

The Missing Partner — Opps! The greatest sleuth in Victorian England goes missing, leaving Vic to rescue him, a suffragette, and about 100 servants. Not to mention an eviscerating cat. Yes, let’s not mention the cat.

A Right to Love — A romantic detour for Jacko. Want to see how amply rewarded Jacko was when he & Vic save an old woman from Bedlam?

The Mesmerist — The Mesmerist can control people from afar and make them murder for her. Worse yet, Xavier Thorn has fallen under her spell.

Well Kept Secrets — The problems with secrets is that they always come to light, no matter how you wish to silence them.

Pack of Trouble — Changes are a part of life, but these changes almost kill Vic.

This entry was posted in Book Spotlights, on Victorian Romance, Promotion and tagged historical mystery romance, Liza O'Connor, The Adventures of Xavier and Vic, The Crimelords' War, Victorian mystery romance. Bookmark the permalink.

5 Responses to New Release: The Crimelords’ War by Liza O’Connor