Please welcome this week’s guest Mary Morgan with her romance 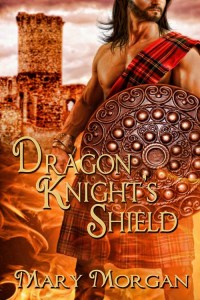 “Never have I seen a woman command men as she does,” commented Robert coming alongside him.

Angus kept silent. He knew his friend had set his sight on the woman as well. He had flirted with her outright at the table last evening, stirring the outrage of Hugh. The man dared to tempt fate to the edge of his life, and Angus wanted to slice out Robert’s tongue with a blade.

Rubbing his hands together to ward off the chill, Robert removed his cloak. “I believe ’tis my turn at a lesson or two.”

Without thought, Angus blocked his progress with an outstretched hand. “Nae. My turn.”

The man raised an eyebrow in amused contempt and took a step back.

As Angus stepped into the clearing, he saw Deirdre’s eyes go wide in surprise. As he gave the others a passing glance, they understood his meaning and retreated to the trees. Removing his cloak, he faced her.

“There is nothing I can teach you, Angus. I’ve seen you fight.” She rubbed her hands down the sides of her gown, and he took this as a nervous gesture.

His steps slowed as he circled her, making her turn as he did. “Ye show the others. Why not me?”

“Because there are some techniques…umm ways…to improve…and they asked, since they believe me…”

“Ye are rambling. Not good for a hunter.”

“I’m not playing this game, MacKay,” she hissed.

“This is no game we play, Flanagan. There is a real danger that cannae be fought with strength alone.”

“Then you’re the fool if you don’t think I understand. The Fianna have told me about the magic of this evil druid. But what they haven’t told me is why he wants to claim the relics of the Dragon Knights.”

Angus clenched his fists. They had no right discussing his past with her.

“Does that upset you?”

He continued his spiral movement around her. “Why would it?”

“Because it shows in your eyes. They go from light brown to blazing amber.”

His smile became predatory. “Ye are a keen witness.”

“Tell me about your relic, Angus?”

Chuckling softly, he kept silent. Her gown twisted as her steps faltered, and he realized she had not mastered moving in the clothing.

She stomped her foot in anger. “Stop moving!”

In one swift move, he had her hands behind her back with his face mere inches from the lips he wanted. “Ye have now become my prey.” He could feel the rise and fall of her breasts with every breath she took, and he fought to control his body. By the gods how he wanted her. She smelled of the woods, wild and untamed.

She blinked and he found desire staring back at him. Twisting her head away from his, she spat out, “Let me go.”

If the others were not around, Angus feared he would have claimed her right there in the snow. He shook his head of the blinding lust and released her. “Ye are correct, Deirdre. There is naught ye can teach me.” Turning slowly, he started to walk away when he felt the blade at his back.

“The first lesson, Angus, in any battle is never to turn your back on the enemy. You have forgotten the basics in defense.”

He held his arms out wide. “Then strike for the kill, Deirdre and pray ye have the strength to aim true.”

She punched him hard in his lower back, causing him to stumble a few feet. “Trust me, I have the strength.” Her words sent a chill down his spine, and the beast became unleashed.

As Angus whirled around, he reached for the arm that held the blade. Her gown twisted and she slipped, bringing them both to the ground. Wasting no time being so close to her heated body, he stood. Shoving a hand through his hair, he then pointed to her bunched up gown. “And the first lesson ye should master is to fight in your clothes. They will be your undoing.” Hissing out several curses, he stormed off to the trees, whistling for Artair.

As he passed one of the pines, a blade flew past his head and landed with a loud thump into the wood. The fire danced off his fingertips, but he made no move to turn around. “Ye missed.”

Angus MacKay, leader of the Dragon Knights, failed his brothers and his clan upon the death of his sister. Now he must fight the darkness of despair tempting his soul. Back on Scottish soil, he comes face to face with Deirdre who can wield a sword as mightily as his warriors, and he takes her captive. Yet, with each passing day, the fire dragon inside him roars to claim the one woman fate has destined for him.  Famed mystery writer, Deirdre Flanagan, is unprepared for the next chapter in her life. On a vacation to Scotland, she steps through the mists and enters into a skirmish alongside a Highlander. However, the fight has only begun, and now she must battle Angus as well as evil in order to claim the love of this Dragon Knight.  Will their love be powerful enough to shield them from danger, or burn them to ashes?