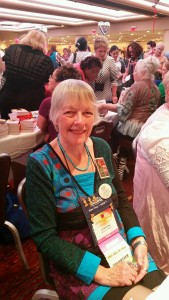 It is with absolute devastation that I discovered yesterday that my favorite romance author, Jo Beverley, has died.

Mary Jo Putney, a member of her blogging group Word Wenches, posted about Jo’s life and death, which you can find here. It is a wonderful memorial to her long-time friend.

This brief post will tell you a bit about my personal feelings for Jo, who was a great inspiration for me as a writer.

My introduction to Jo Beverley’s writing was in a short story, “The Determined Bride,” set

in the Georgian period. It so enchanted me with the characters and the neat way she plotted it, that I started collecting her books, both Regency and Georgian. And immediately grew to love anything she wrote. I read them mostly out of sequence, picking up the paperback books through Amazon, used book stores, thrift stores, and when new ones came out, at Barnes & Noble.  I remember clearly seeing The Secret Bride at a Food Lion and grabbing it.

I don’t think I have any of her books, save one novella, as an  e-book. I always wanted her books in my hands, as though that tangible object brought me one step closer to her somehow. I love all her books, some more than others, naturally, but my two favorites are from the  Malloren series,

Something Wicked, and Devilish. They are the only books I’ve ever read that when I re-read them, I’m on the edge of my chair, wondering if the couples will get together in the end. No matter that I know the outcome, it always feels like the first time.

Then, at the Atlanta RWA National convention, I met Jo for the first time. I was at a PAN authors event and I saw her standing talking to someone. Quaking in my shoes, I waited until she was free and as I approached her, she opened her arms and hugged me. Then, she stepped back and said, “Oh, please forgive me, I thought you were someone else.” (Like I would be offended that she’d hugged me!) I told her I was an author, and my name, and she said, “Oh, yes, I’ve heard of you.” That’s when I came very close to losing it. I didn’t, but I proceeded to fan-girl all over myself as we talked for a few minutes.

I met her several other times during that conference and at both the San Antonio National, where I attended her workshop on English Titles, and at the New York conference last year. Each year I went to the Literacy Signing, but I only have two books signed by her, because I was signing books myself in San Antonio and didn’t get to her booth that year. A major regret.

My Georgian series, The House of Pleasure, and particularly the first book, Only Scandal Will Do, was inspired by Jo’s Malloren series, which I’ve read and re-read many times. I did get to tell her that in Atlanta and I plan to dedicate the third book in the series, Only A Mistress Will Do, to Jo for her inspiration and the countless hours of reading enjoyment she’s given me.

I bought her latest, The Viscount Needs A Wife, last Sunday and I plan to savor it rather

than gobble it as I usually do with a Jo Beverley book. And all of Jo’s fans will rejoice even in their sorrow to know that she’d completed one final book that should be released next spring, according to Mary Jo Putney’s post. So there is one last encore to look forward to.

I am a great fan of the movie Shakespeare in Love, and when I heard the news about Jo’s death, I was reminded of a scene in that movie when a company of actors is informed of the playwright Christopher Marlowe’s death. Ned Allyn, the company’s premiere actor, played by Ben Affleck, says of him, “He was the first man among us.  A great light has gone out.”

For the romance community now a great light has gone out as well.

This entry was posted in Historical Romance, In Memorium and tagged death of Jo Beverley, In memoriam, Jenna Jaxon, Jo Beverley. Bookmark the permalink.

24 Responses to In Memoriam: Jo Beverley