Crashing Through Time is March’s “Book of the Month” so I’ve put up 10 lines from my fun, sexy time-travel romance.

At this point in the  story, Corrine MacGowan has fallen down a well. She recovers and      staggers out of the woods only to be almost trampled by a horse and rider. The horse shies at her, throws its rider and Corrine is left to help the unfortunate man. (Please forgive the creative punctuation.) 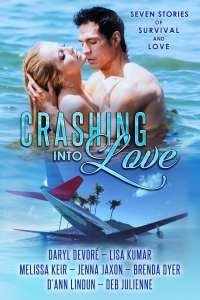 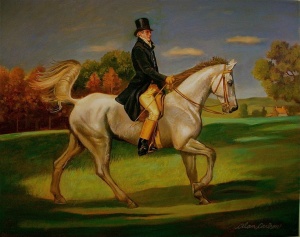 The curse brought her attention to a young man lying on the ground to her left. He lay flat on his back, his face screwed into a furious frown. If not for that, he would’ve been pretty hot. Dark brown wavy hair, a ruddy complexion, and very full, sexy lips sent a little thrill through her. A typical Englishman, he even had those odd mutton-chop sideburns like Colin Firth in Pride and Prejudice. Were those back in fashion over here? She didn’t remember seeing anyone else wearing them.

God, he had a devastating English accent—she could listen to an Englishman talk all day long; she sighed with sheer joy.

Crashing Through Time is available in the boxed set Crashing Into Love  here.

More than hearts can be broken when you crash through time.

Theatre professor Corrine MacGowan is in a sightseeing plane that crash lands in a field in Cornwall. She wanders away from the crash site, led by a strange buzzing in her head that is coming from a black well (think The Ring). She falls down the well and ends up in Cornwall in 1868 at the home of her Master’s thesis subject, playwright Sir Robert Graysill. She immediately meets Sir Robert’s nephew, Ian Hunterly, and once she comes to terms with the fact that she has fallen through time, realizes from her research that Ian is doomed to die within a matter of days. Can she save him and change history? Or let history run its course and lose the man she has come to love?

That’s all for this week. Hope you enjoyed it!