Cover Spot has returned! I’m playing around with a logo for the post, so bear with me as this changes.

But today’s featured cover is from Gina Danna, who, like me , writes in all different periods. This new book is set in Ancient Rome and the cover is a beauty! 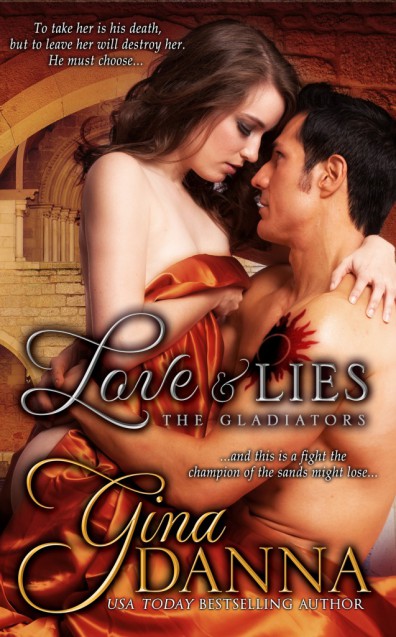 Quote from Gina Danna ~ ” It’s to depict a seduction – she’s a Roman lady, he’s a gladiator/slave. Its a wrapped up affair of love and lies – he hates Romans, she’s Roman & though she is the master, he controls her fate for to escape with her is his death but the leave her puts her in hell.”

Conquered, beaten, sentenced to die in the Colosseum, Ganius escapes his execution only to find himself enslaved as a gladiator. His rise to champion ensures his life, but does nothing to lessen his desire for vengeance against the Roman soldiers who destroyed all he knew.   Locked into a repugnant betrothal, the beautiful Roman Aurelia turns to her brother’s champion gladiator for help. Promising him his freedom if he helps her escape, Aurelia soon discovers she wants not only Ganius’s help, but to capture his heart as he’s captured hers.
In love with his sworn enemy, Ganius realizes Aurelia is the key to his freedom. But to take her with him would risk both their lives, yet leaving her behind to be a pawn in her brother’s machinations is a wretched alternative. Ganius must choose—love of a Roman or freedom to make the Romans pay. This is a fight the champion gladiator might lose…