When I originally ran into this word I immediately thought it would make a great addition to my Alphabet Posts.

Salmagundy is a 17th century English dish (also spelled salmagundi), a sort of chef’s salad actually, that was a centerpiece to a meal that rivaled the status of a roast beef on the table.  It incorporates all manner of diverse ingredients on a bed of lettuce:  cooked sliced meats such as chicken, venison, ham, anchovies, seafood, assorted vegetables, green leaves such as spinach and lettuces, eggs, mushrooms, raisins, olives, figs, potatoes, peas and currants.  Cover with a mix of oil and vinegar. 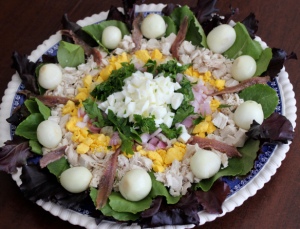 This salad was also served, apparently, on pirate ships, although usually as a stew of meats, anchovies, eggs and onions, well spiced, and served over lettuce.  National Geographic, in its post called “Eat Like A Pirate,” has an authentic pirate recipe from 1712:

The origin of the word is believed to be the French word salmigondis, meaning a disparate collection of diverse things, people or ideas combined to make a coherent whole.

Colonial Williamsburg has a recipe for Salmagundi, if you’d like to give it a 21st century try. 🙂  I may actually attempt this over the weekend.  It sounds oddly savory.  I’ll let you know next Wednesday on my 411 post how it went. 🙂