Author Interview: Christine Warner and Some Like It In Handcuffs

I’m so excited!  One week later and I have a return engagement with the wonderful Christine Warner who’s celebrating an anniversary today.  Please help me welcome a fantastic author of romantic suspense! 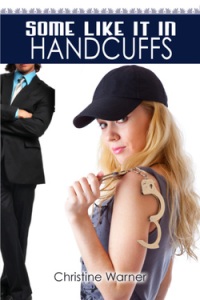 Tell us a little bit about your release.

Some Like it in Handcuffs officially released in March 2012, so we are celebrating my year
anniversary. This was my debut book…and I’d love to share the blurb with you.

Sunny Kennedy, the only female in a family of blue blood male detectives, is determined
to prove testosterone isn’t the only qualification required to solve a cold case. Handcuffed
while undercover then taken to the precinct by an attractive detective, her domineering
family demands she work with Detective Judson Blackwolf, or she’s off the case.

Judson Blackwolf thinks women in law enforcement should work behind the scenes. The
prospect of working with his Captain’s sexy daughter doesn’t thrill him. He only agrees in
hopes of solving the murder of his one time mentor’s daughter. Once the case is over, he’s
moving to Montana to heal his wounds from the loss of his last partner.

But when their investigation takes a dangerous turn, Sunny and Judd soon realize their
feelings for each other cannot be denied.

What was your inspiration for this story?

This might sound a little odd, but I actually came up with the title first. Those five words
popped into my head and from there the characters were formed, plots tweaked and my
storyline was born. I’ve found since then that I love to have a title before writing begins,
even if I end up changing it. 🙂

I love choosing character names too. I actually can’t start a book until I have them picked
out. When I chose the name Sunny for my heroine it just fit with her personality. She’s a
bit spunky and sassy, but has a big heart. As for Judson, at the time I was working on this
story I worked in a large emergency department. Many patients came through the doors
and I was privy to hundreds of names a night. One patient was named Judson, I had never
heard the name before and loved it on the spot…and I knew instantly what name I’d give
to my hero. 🙂

Do you have plans for a sequel to this book?

When I originally wrote Some Like it in Handcuffs I planned to write a book for each of
Sunny’s four brothers, but several other projects needed tending to first and I haven’t accomplished that goal. I do have one brother’s story complete, but I haven’t submitted it because I don’t know when or if I’ll have a chance to follow up with the other stories and didn’t think it’d be fair to my characters or my readers to only add one story to the series.

But…we’ll see how things go, and if I can manage to get the others written, I’d love to.
Judson, Sunny and all of her brothers hold a special place in my heart…but I want to make
sure I can devote the time needed so their stories have the time they deserve.

If you could have one wish granted just for you (not world peace, LOL), what would you
wish for?

I know most authors wish for this, and I’m no exception…I’d love the ability to write full
time. And it’d be even better if I could do it on my own private island while lounging in
a comfy padded chair with the light breeze from the water keeping me cool while warm
sunshine kissed my skin. 🙂 Heaven!

I gave up coffee a few months back…I miss it, but I was also a tea drinker as well…so I’ll
make it. Lol I like warm tea or cold tea. 🙂

I’ve always been attracted to tall, dark and handsome…Hello Gerard, Johnny and Jake 🙂

Would you rather skydive or scuba dive?

I’m terrified of heights, so I’d have to go with scuba diving. Actually, I think I’d really like
that adventure. 🙂

What’s the one thing you would never do?

The first thing that comes to mind is skydive! lol

Thank you so much for coming by today, Christine.  Best of luck with your tour and the book.  So nice to see you again.

“This isn’t how I wanted it between us.” Judson grabbed the neckline of her sweater, dragging her body to meet his with a solid thump. Sunny licked her lips in answer to the question in his eyes. He lowered his head to move his mouth over hers.

Sunny closed her eyes, a small whimper escaping her lips. She didn’t want it like this either, but that wasn’t possible. Unable to resist her attraction she accepted it wasn’t an affair, or a long distance romance she craved, but for him to love her back. It was all or nothing for her. Her heart sank. She accepted this as their goodbye kiss.

With no thought to what was happening upstairs, Sunny rose up on her toes demanding more. Her lips pulsated against Judson’s. When his hand trembled against her cheek in a soft caress she lost touch with reality.

“Judson.” Sunny’s weakened body drifted farther into Judson’s as his fingers glided down her arms, pulling them to her sides where their fingers intertwined. He forced them behind her before his tongue thrust into her mouth.

Their bodies molded together, she heard her own heartbeat and his as well when he curved his fingers around her rear and squeezed.

That’s when the click of the handcuffs against her wrist connected her to the handle of the locked cupboard.

“What the hell…Judson?” She looked up at him, her knees shook, her body still inflamed with fever.

“Like I was saying, you wait here and I’ll go upstairs to check it out. Backup’s already been called, so you’re safe until your brothers arrive.” Judson winked before walking toward the steps to the third level. Once he reached them he turned toward her and smiled. “Gotcha,” he whispered with his notorious grin.

Some Like it in Handcuffs is available in print and digital format at:
http://thewildrosepress.com/
http://www.barnesandnoble.com/
http://www.amazon.com/
And you can find me at:
My blog/website: http://christine-warner.com/
Twitter under ChristinesWords: https://twitter.com/#!/ChristinesWords
My Facebook page…stop by and give it a LIKE to keep up on what I have in the works:
http://www.facebook.com/pages/Christine-Warner/143430882396013
Goodreads: http://www.goodreads.com/author/show/5763713.Christine_Warner

20 Responses to Author Interview: Christine Warner and Some Like It In Handcuffs