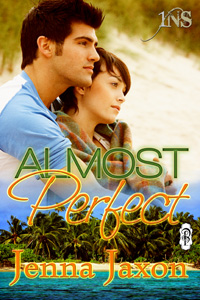 So to celebrate “our” one year anniversary, I’m going to post the book’s blurb and an excerpt and give everyone a chance to leave a comment.  At the end of the day, I’ll randomly choose five commenters to receive a copy of Almost Perfect.  So please leave your email address when you comment!

Pamela Kimball’s birthday present, a 1Night Stand adventure, promises to jump-start her life, put a new man in her bed, and help her forget her past.  Unfortunately, movie-buff Pam’s Pirates of the Caribbean fantasy takes an alarming wrong turn when she’s abandoned on a not quite deserted island—with ex-husband Roger Ware.

Forced by hunger to accept Roger’s offer of dinner,  Pam realizes the geek she married has transformed into one of the most charming, sexiest men she’s ever met. His newfound confidence—and hot body—re-kindle old fires.  A simple kiss leads Roger to challenge her to discover how much his lovemaking skills have improved, leaving Pam torn between self-preservation and burning desire.

With time running out before they’re rescued, Pam must decide if her heart can survive the consequences of becoming Roger’s “almost” perfect 1Night Stand.

Standing as good as naked on the deserted beach, she smiled as the warm breeze caressed her bare body. The sense of being slightly naughty added to her delight in the sensual feel of the air as it dried her breasts. Her nipples peaked as the wind cooled them. She strutted down to the water’s edge to sink her toes in the sand, the salty tang in the air adding to the perfect moment.

“If you’re skinny dipping, you forgot to remove one very important piece of clothing.”

She whirled around. Roger stood on the beach behind her, a green bottle of Perrier in one hand. His gaze played up and down her naked torso and his salacious grin widened. “Mind if I join you?”

She gasped, wrapping her arms across her chest to shield her breasts from his hot gaze. “What the hell are you doing back here?”

“I came to make peace.” He waved the bottle at her. “Thought you might be thirsty by now.”

Her eyes fastened on the green glass, her mouth suddenly dry as though she’d eaten sand. She took a step toward him then froze, unwilling to take anything from Roger, not there anyway. That would make her feel weak, dependent. At this moment, though, she had to acknowledge, she was weak, dependent and thirsty.

“Come on, Pam. It’s only water.” He still held the tempting thing out to her. Damn. She tromped up to him, her steps thumping as loud as she could make them on the packed sand. Stopping an arm’s length from him, she peeled one hand away from her breasts and shifted her other to cover as much as possible. For once, she thanked God for a B cup. She snared the bottle, shot him a look of triumph, only to realize it remained capped. To open it she’d have to use her other hand.

Furious, she shifted her gaze from the tantalizing object to his gleeful eyes. “Would you open this for me, please?”

“Suddenly lost all your strength, have you, hon?” His eyes took on a hunger she remembered. “It’s not as if I’ve never seen your breasts before.”

“Then you don’t need to see them again, do you?” Heat rose in her cheeks. “Come on, open it. You said it was a peace offering.”

“And these are part of the peace negotiations.” He stood, arms crossed over his muscled chest, better looking than she remembered. Not fair.

“I’m bored. My date still hasn’t turned up, so I thought I’d come harass you a while. I’ll tell you what.” He reached for the Perrier and unscrewed the cap, but didn’t offer it to her. “You show me yours, I’ll show you mine.”

“And why would I want to see yours again?” Her eyes remained on the bottle resting at his hips and watched the carbonated bubbles rising to the top.

“For old time’s sake?” His eyes flashed with mischief as he tipped the sparkling water up and started to drink. She stared, her parched lips opened in outrage. Glug, glug. He made that sound on purpose. Was he going to drink the whole damned thing?

After swallowing at least a third of the contents, he came up for air. “Ah! Hits the spot every time.” He grinned. “Still can’t take a joke? Too bad. Here.” He thrust it toward her. Grabbing with both hands, she shoved the end into her mouth so quick the glass clicked against her teeth. Greedily, she sucked in and almost choked. The exquisite, light lime-flavored water rushed into her body to hydrate the parched cells. Three more guzzles and she breathed deeply, satisfied for the moment.

She pulled the lip away and wiped her hand across her chin where she had dribbled some. Holding it out to him, she noticed his slack-jawed attention riveted straight on her chest. Which meant….

“You still look fine, Pam. Mighty fine.” Her ex-husband licked his lips, his grin reaching almost ear to ear. If there weren’t still some water left in the bottle, she’d brain him with it.

He reached down and slipped off his sandals, then untied his drawstring, all the while gawking at her breasts. With one swift movement, he shucked his pants to reveal a hard, tanned body, complete with a serious erection.

She hadn’t seen that coming. Her mouth dropped open as the Perrier hit the sand. She stared at his fully aroused cock, a shiver of pure desire sparking through her before she dragged her gaze back up to his face. A low chuckle rumbled deep in his chest. “A promise is a promise. You showed me yours.” He threw her one more impish grin before taking off for the water. “You coming?”

I hope you enjoyed that as much as Roger did! LOL

Almost Perfect is available at Amazon, Barnes & Noble, Decadent Publishing, ARe and other popular e-tailers.