The Romance of the Vampire by Jennifer Malone Wright

Today, just in time for Halloween, I have Jennifer Malone Wright, author of The Vampire Hunter’s Daughter, a YA paranormal series.  Jennifer’s talking about how the shift in vampire allure and how she’s resisting that trend.

Vampires today are not the scary blood sucking vampires from the past, they are now common in paranormal romance books, television shows and the girls are swooning over them.

When I was writing The Vampire Hunter’s Daughter, I didn’t want my vampires to be good guys. My intention was to bring back the baddies in vampires and write about those who hunt them. So far, there are no vampire romances in this book and I don’t intend to have any. Except for possibly the back story on my bad guy, but he still remains purely evil. 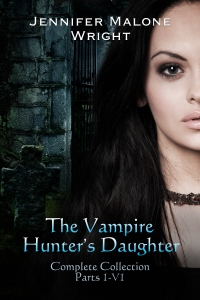 I feel like the book world is now swamped with vampires who we love, or are intended to be loved. We need our bad guys back. In my other novel, The Birth of Jaiden, I did write about a good vampire and I love him, but in a way I feel like he should still have been a little bit more evil or been fighting his evil tendencies more.

We all love to love our bad boy vampires, but they can’t all be romanced. Having too many nice vampires is beginning to steal the bad boy out of our vamps. So, The Vampire Hunter’s Daughter series is only going to have bad guy vampires, no squishy romances with them…the hunters are born and bred to kill the evil vampires…well, all vampires so the only romance I want to have is with the hunters. Although, Chloe is a half vampire, so I don’t really count that.

What are your thoughts on this? Do you think that we are seeing far too many “Nice” vampires with the overflow of paranormal romance books out there? Let me know your thoughts, I’d love to hear them!

This special edition of The Vampire Hunter’s Daughter contains parts I-VI, the complete collection. Fourteen-year-old Chloe witnesses her mother’s murder at the hands of a
vampire. Before the vampire can kidnap her, there is an unexpected rescue by a group of vampire hunters. Overwhelmed by the feeling of safety, Chloe passes out and
they whisk her away to their small community. When Chloe wakes, she comes face to face with the only other living relative, besides her mother, whom she has ever met: her grandfather. Chloe’s mother kept her hidden from the family; now, Chloe tries to unveil the family secrets.Through her grandfather, she learns her mother was a vampire hunter. In fact, her entire family is descended from the powerful bloodlines of vampire hunters. Chloe agrees to join the family she has never known for one reason only: Chloe vows to kill the vampire responsible for her mother’s murder. With vengeance in her soul, Chloe is even more determined to follow through on her vow when she discovers the true identity of her enemy and how he is connected to her.

Experience the world of vampire hunter’s, vampires and mythology with Chloe in this
exciting series.

Excerpt for The Vampire Hunter’s Daughter:

I took the first book off the stack and examined the cover. It was titled Vampires throughout History. The cover was leather and so old it was stiff and cracked in spots. The pages showed signs of age too, yellowing and stiff to the touch. There was no table of contents, so it looked like I was going to have to scan the entire book for what I was wanting. I flipped the pages carefully, so as not to tear any of them.

After an hour of scanning and about half way through the book, I found something referring to vampire children.

Although extremely rare, the natural-born offspring of vampires exist throughout the world. These rare beings are called the dhampir. Dhampir are usually the product of a vampire and mortal. The most common of these unions is a male vampire impregnating a mortal woman. Vampires, both male and female, are seductive in nature and some mortals came willingly to these unions. However, the majority of dhampir born were produced through an act of rape.

Solitary by nature, it is uncommon for a vampire to settle with any one mate for long. The
children of vampires, the dhampir, more often than not exhibit all the characteristics of
their vampire parent. The strength, speed and agility are the usual hereditary traits that the children develop. They are not always born with these traits but develop them as they grow into adulthood.

The dhampir are day walkers. Some of these children are sensitive to the sunlight but will

not perish in the direct rays. Most have no sensitivity at all. Drinking the fresh blood of mortals is also not usually required of the dhampir; however, some have a liking for it. Very few actually need it to survive.
Most dhampir are rejected by the vampire species because of their mortality and weaknesses. Mortals often reject the dhampir, as well, due to their vampirism, so they frequently remain outcast.

Dhampir are known for becoming vampire killers. Their closeness to the vampires and their vampire characteristics make them powerful vampire hunters. The unique ability to track and kill vampires is specific to only the dhampir and the mythological race of vampire hunters.

Historically, dhampir became vampire hunters as a trade. Towns and villages became
plagued by vampires who were terrorizing their homes and killing their people. The dhampir accepted contracts in exchange for monetary payment and used their likeness to their vampire counterparts to exterminate the vampires.

Holy crap, that was a lot to process. The more I read the passages, the more I understood that my being a hunter was more than my heritage; it was my history and my future. Everything about my bloodlines had hunters involved.

Part I of The Vampire Hunter’s Daughter is FREE . You can find it FREE at the links below.

The Author is giving away a $100 gift card from Amazon as the Grand Prize throughout the tour.  To Enter click the button below:

Jennifer Malone Wright resides in the beautiful mountains of northern Idaho with her husband and five children. Between the craziness of taking care of her children, whose ages range from fourteen all the way down to six months, and being a homemaker, Jennifer has little time left for herself. The time she does have left, usually leading far into the night, is spent working on freelance work or her beloved fiction.

When she grew up, Jennifer always had her nose in a book. She has been writing stories and poems since grade school. This love of the written word and her strong interest in the paranormal is what has led to her first novel “The Birth of Jaiden.”

In addition to being a mother and homemaker, Jennifer is also a very proud military wife. Moving around the country for the last ten years has made her a bit of a nomad and she finds it difficult to be in one place for too long.

Jennifer is also the author of The Birth of Jaiden, a paranormal novel filled with action, suspense, and even a love story.